Mobility, Flexibility, Opportunity – What can an outside broadcasting van do for your business? 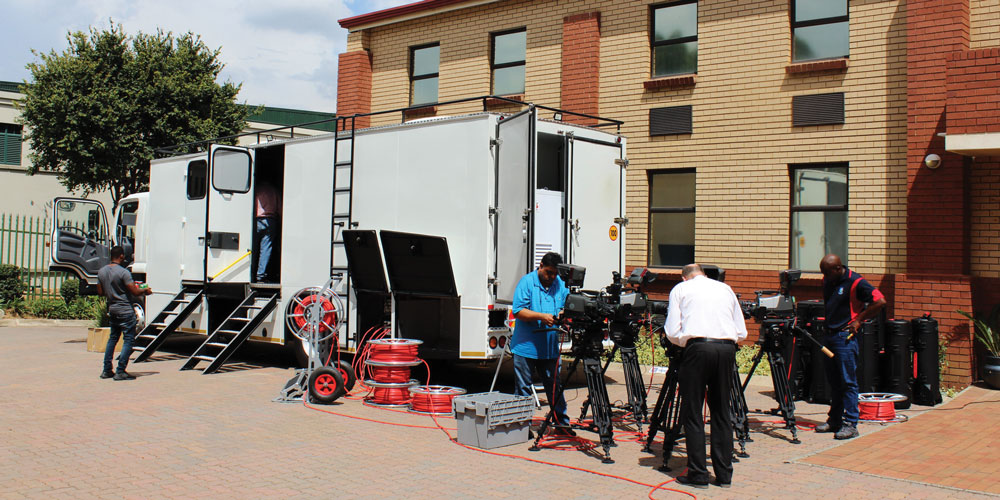 Outside Broadcasting (OB) – also sometimes called Electronic Field Production (EFP) – refers to any footage that is captured and broadcast from outside the confines of a production studio. When one considers the range of televised events that this definition covers – from sports events to awards ceremonies, live concerts and news reports – it is perhaps unsurprising that the majority of broadcast content in South Africa is OB-based.

In essence, an OB van is a mobile production studio. From electrical power, to cameras and mixers, playback and recording units, audio interfaces and communication systems – all equipment needs to be of broadcast quality, and capable of being housed and transported in one vehicle. Not only this, but – due to the high-pressure environment of outside broadcasting – the system needs to be user-friendly, allowing engineers precise control over the various components.

According to Shaun Kerr, OB vans can offer “unique opportunities to production companies, allowing them to set up for high-quality production virtually anywhere it might be required.”

This certainly seems to be in line with the thinking of Urban Brew Studios, who – along with the move to their state-of-the-art new facilities – recently contracted Protea Electronics during the purchase of their own OB van.

Urban Brew Studios’ CEO, Verona Duwarkah explains that “although we’ve had OB vans previously, they became outdated in terms of HD capability. That meant, with the changeover from SD to HD, we were hiring in quite a bit.” Theunis du Toit adds to this point, saying, “It made sense from a business point of view. Although outside broadcasting was an offering of ours previously, now we have an OB van that we own: we can use it on our own productions and also make it available to others as an additional revenue stream.”

And as far as content strategy is concerned, Urban Brew aim to use their new van to expand and enrich their current OB portfolio. “Having an OB van of your own gives you that flexibility in the business,” says Duwarkah. “Rather than just keeping Live Amp in a studio all the time, you can actually go and do road trips – you can get to your audiences in the different provinces. The same goes with our youth programming: we would like to be able to take our offerings to children around the country.”

In terms of how Protea went about kitting out Urban Brew’s new OB van, Kagiso Mabe explains that the company always follows similar principles. “Broadcasting is a system, and whenever you are coordinating a number of parts, communication with the customer is the most vital aspect. You need to get a sense of their ambitions – what they want to use the equipment for, both now and in the future – so you don’t end up under-supplying them or taking away any functionality.”

Mabe says that, “the coach build was done locally, and we collaborated with another company to rig up the cabling inside the truck. So the OB van project was a local production, from the modification of the vehicle to the installation of the equipment.”

Jacques Welthagen of Protea describes the studio rig contained in the Urban Brew van as, an eye-wateringly sophisticated set-up for such a compact space. “The Urban Brew OB van is HD-ready and is pre-wired for 10 cameras and eight recording channels to the Stryme Video Server and another four channels for playback. For visual mixing, there is the Grass Valley Korona unit, and – at the heart of the operation – is a Grass Valley router with an Apantac Compact Multiviewer. The CG (Character Generator) unit is a Ross Xpression.”

Interestingly, Urban Brew’s new OB van has already been tested in terms of its key requirements of functionality and ease of use.

As Mabe explains; because of tight deadlines and ongoing building construction, when Urban Brew initially relocated to their new studios “the plan was first to make sure that one studio was fully operational before the 1 April deadline. So we got the floor going and rigged up lights in there, and in the end the studio operations were actually run from the OB van, while our team moved into the Master Control Room and started installing the rest of the studio kit.”

Not only did the OB van deliver in this high-stakes situation, but Mabe also shares that “in the studio’s Master Control Room, we ended up installing a Grass Valley Korona switcher. This was already in the OB van, and once the Urban Brew engineers were used to this piece of equipment, when they were ready to move into studios we brought the familiarity and the comfortable use of this kit into the main facility’s control rooms.”

In Kerr’s view, this case study shows that “as a facility, Urban Brew are thinking outside of the box, and they are adding value to their customer base by having this ability to do both in-house production, as well as to take any production out on the road with the OB van. They are allowing their customers this freedom and flexibility to shoot in different locations.”